The 1948 St. Enda’s Senior team which won the Tyrone Senior Football Championship for the first time

1933 – Won the West Tyrone Championship for first time and reached Tyrone senior championship final only to lose to Dungannon by a point, 2-2 to 2-1. Also won the McAleer Cup.

1939 – Won the McAleer Cup for the third year in succession thanks to a last minute goal against Trillick winning 1-1 to 0-3. Cup was subsequently renamed the St. Enda Cup.

1942 – Tyrone senior championship finalists again. Lost heavily to Moortown 2-5 to 0-1. Goalkeeper Seamus Bonner and Paddy Turbett have played in all four finals from 1933.

1943 – Won Minor championship but lost on appeal to Coalisland.

1947 – Dan McCaffrey scores a goal for Tyrone minors in great fightback against Mayo to win All-Ireland title for first time on score of 4-4 to 4-3. Patsy Donnelly from St. Enda’s was also on team. Celebration bonfire lit on Gallows Hill for their return to Omagh.

1953 – Retain Senior Championship title with Clonoe again on the losing end, 3-6 to 2-3. Donal Donnelly goes on to captain team in Irvinestown tournament to win wrist watches.

1954 – Fintona’s Jackie Martin makes debut with St. Enda’s, scoring 1-1 in league game against Moortown. Paddy Corey from Dromore also joins during the team during the year.

1957 – St. Enda’s ‘Famous Five’ travel with Tyrone to New York and on their return helped the club win its fifth senior crown by defeating Derrylaughan 1-7 to 0-3.

1959 – Controversial end to senior championship with Clonoe ‘awarded’ title after St. Enda’s claimed they were not given adequate notice of county final date.

1962 – Club committee pays £1,400 to secure 13 acres of land on the Gortin Road for the development of a playing pitch. Chairman Michael Healy describes it as a ‘great and memorable year’.

The 1963 Senior championship winning side

1965 – Minor football and U16 Hurling champions. Roddy Tierney captains footballers to 2-10 to 0-5 win over Derrylaughan with Neil Barbour scoring two goals for the hurlers.

1967 – Senior hurlers win championship for first time, defeating Benburb 5-7 to 4-1. Bro Ennis who won a football medal in 1963 now has a hurling medal

1972 – Oliver O’Neill, Justin O’Doherty and Jimmy McDaid on the Tyrone minor side which lost All-Ireland final to Cork.

1973 – Donal Donnelly manages Tyrone minors to All-Ireland victory over Kildare with Justin O’Doherty at left half back.

1976 – Another All-Ireland Scór title, this time for the Ceili Dance team.

1976 – U16 footballers win the West Tyrone League and Championship double only to lose county final to Dungannon by a point, 1-8 to 1-7.

1976 – A bad year for senior football, with seniors relegated to Intermediate status for first time.

1980 – Seniors deprived chance of ‘triple crown’ after losing championship final to Trillick after a replay, but win the League and Jim Devlin Cup.

1981 – U16 hurlers win Noel McClements Memorial Cup beating Killyclogher 3-9 to 0-1 in the League final at the Brothers Park. Dominic McClements, nephew of the late Noel McClements who played youth and senior hurling for St. Enda’s, was captain of the side.

1982 – U16 footballers defeat Killyclogher to win the championship.

1983 – U16 footballers retain title by defeating Dungannon with U16 hurlers defeating Killyclogher by a point to do the double.

1983 – Minor footballers and hurlers also do the double by winning the championship. Footballers defeating Dromore 3-7 to 1-7, the hurlers defeating Dungannon 3-8 to 3-1. It was the club’s first ever minor hurling title.

1983 – U14 hurlers round off a great year by winning the League and championship double, going on to represent Tyrone in the All-Ireland Feile in Dublin.

1984 – Senior footballers back in championship final but lose ‘Centenary Year’ decider by a point to Ardboe, 0-8 to 0-7.

1984 – U16 footballers win the league and U16 hurlers win the championship, with nine dual players winning medals.

1984 – U14 footballers win the Tyrone league and championship and All-Ireland Feile.

1984 – St. Enda’s camogie team come close to winning first title, but the minors lost to Eglish after a replay.

1985 – For second year in succession the minor footballers and hurlers are in championship finals. The footballers lost to Coalisland after a replay while the hurlers defeated Killyclogher 3-2 to 0-3.

1985 – The U16 footballers and hurlers are also in the final, the footballers lost to Beragh but hurlers completed three-in-a-row with a 4-5 to 1-3 win over Dungannon.

1985 – U14 footballers win the Tyrone Feile but U14 camogie team lose championship final to Greencastle.

1986 – U14 footballers win Tyrone and All-Ireland Feile ‘C’ titles, beating Clara of Offaly in the decider in Cork 1-10 to 0-4. James Curran was the captain.

1986 – U14 hurlers make it a great year for this age group, winning the championship by beating Carrickmore 8-7 to 2-0. Represented Tyrone at All-Ireland Feile in Clare.

1986 – U18 hurlers win third championship for club, defeating Dungannon 4-7 to 1-3 with Coling Keys the captain. 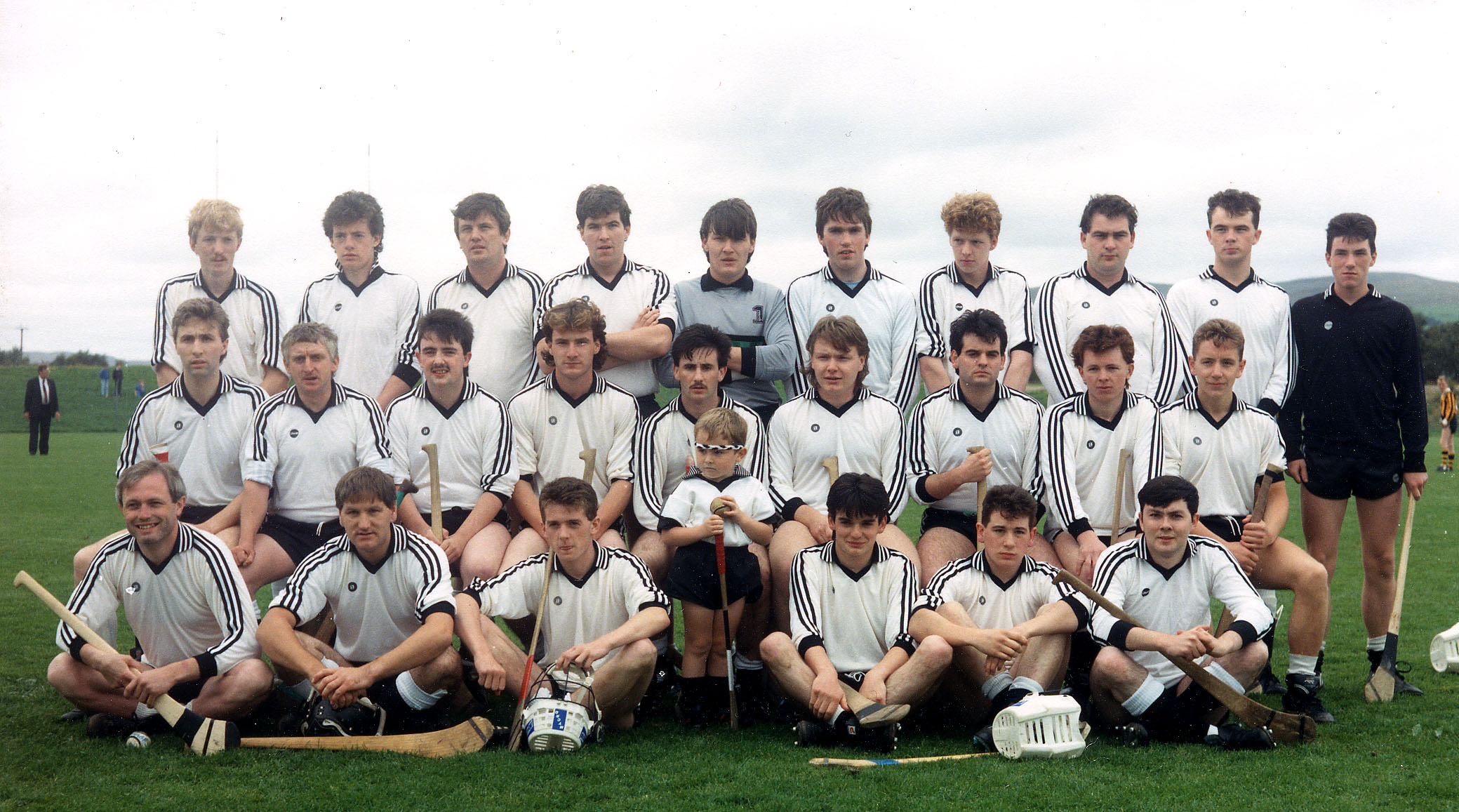 1988 – Senior hurlers unlucky not to make it a football and hurling double with Carrickmore scoring two late goals in Healy Park to snatch victory. Final score 2-8 to 1-6.

1988 – A triple All-Ireland win in Scór for St. Enda’s, with the juniors winning Ceili and Set dancing while the seniors won the national Ceili dancing title.

1989 – Senior footballers win the McGarrity Cup while the minor hurlers hammer Shamrocks 7-16 to 1-2 to claim a fourth championship title in this grade.

1990 – Senior footballers back in the championship final, but lost to Coalisland 4-6 to 2-7. They made up for the loss in the league playoff, beating the Fianna by a point 1-8 to 1-7 with Seanie Meyler scoring six points. Patsy Kerlin was captain.

1990 – U16 hurlers do the double by winning the league and championship.

1991 – Another double act for the U14s, with the footballers and hurlers winning the Tyrone Feile titles with ten dual players making up the sides.

1992 – U14 footballers win the championship and Feile.

1992 – Senior ladies team contest the championship final for the first time before losing to Carrickmore 4-10 to 1-5.

1995 – Minor hurlers, captained by Kevin Cunningham, win Tyrone championship and crown it off by winning Ulster Shield final, defeating Burt 3-7 to 1-6 in final at Ballinascreen.

1997 – Senior hurlers lose another league final, again to Dungannon on the score of 2-8 to 1-8. U21 hurlers also pipped in the championship final.

1997 – Ceili dancers win Tyrone and Ulster finals but lose out in All-Ireland final.

1998 – Senior mens football team back in the county final again but Ardboe spoil chance of victory, losing 0-11 to 0-8.

2004 – A second All-Ireland final appearance for the Ceili dancers.

2005 – Senior footballers reach county final for the 17th time since 1932 but are pipped by Carrickmore 1-6 to 1-5. Joe McMahon denied senior medal after winning Sam Maguire with Tyrone in September.

2006 – U14 footballers win Grade 1 league and with the ‘B’ team reaching Grade 4 championship final.

2006 – Two All-Ireland Scór titles in Ballad Singing and Ceili dancing with Ballad Group unlucky not to make it a triple crown. Caoileann McEnhill features in all three acts in Killarney.

2008 – Double titles for U14 footballers, U16 footballers and a league title for the minors. Defeat in championship final prevents a clean sweep of titles.

2009 – Minor footballers sweep up in Tyrone league and championship before winning the Ulster minor championship title at St. Pauls. Barry Tierney the captain.

2009 – U16 boys lift the championship for fourth year in a row after defeating Cookstown in a replay while the U16 girls win the Grade 3 championship defeating Strabane 5-13 to 1-8.

2010 – Minors reach third final in a row and beat Cookstown in the decider 4-8 to 0-11. They also beat Dromore 0-13 to 0-9 in the league final to secure the double for second year in succession.

2010 – U21 footballers reach Tyrone final yet again but ejected from the competition after semi-final controversy.

2011 – U21 Footballers win Tyrone and Ulster titles, beating Mayobridge in provincial decider 1-11 to 2-7

2014 – Senior Reserves clinch the Tyrone Division One League title losing only one of their 15 league games. The last time the title was won was in 1988.

• Data compiled by Dominic McClements. Every effort is made to ensure accuracy but if you feel that some information is missing or needs corrected please email Dominic on pro.omaghstendas.tyrone@gaa.ie