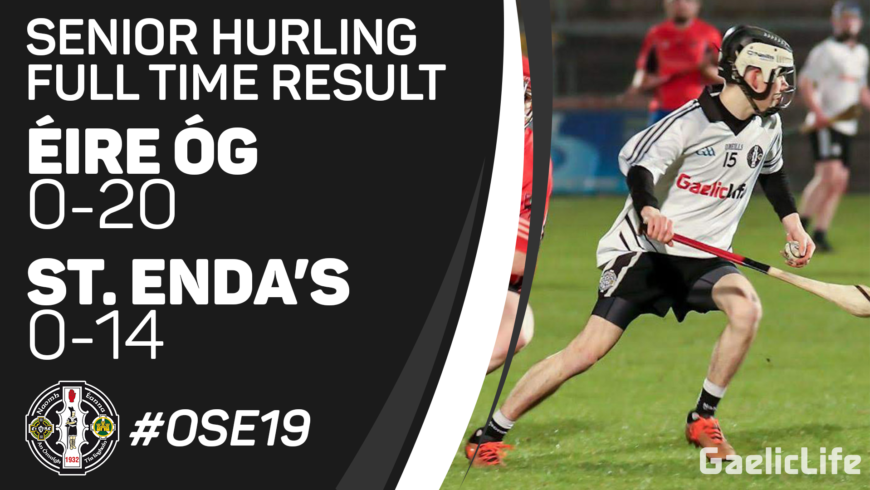 Our senior hurlers kicked off the Tyrone League Cup on Monday evening with a short trip to Éire Óg in Carrickmore. Éire Óg, last years Tyrone Senior Championship Runners Up were firm favorites ahead of the fixture, but that wasnt going to stop the St. Enda’s men making it a difficult night for them, even with a number of key players not able to make the trip.

Éire óg started strong, with 5 unanswered points before the Omagh men settled and were able to get on the board with a Ciaran Lagan free. The home side had a number of goal opportunities thwarted by defenders Gerard Fox, Cahir Turbett and Thomas Cunningham, with Goalkeeper Shaun McLaughlan making a number of magnificent saves in the opening 20 minutes. Additional scores by Ciaran Lagan and Tom McClements ensured that Omagh had points on the board at Half Time. Éire Óg led at the break 0-13 to 0-03.

After a half time team talk by mentors on the line Damien and Donal, and a few positional switches, the Omagh lads emerged for the second half with high heads and threw everything at the home side. The forwards settled into the game in the second half, with great passages of play from Aidy O’Neill, Cormac Taggart & Paddy McMahon and with scores from Ciaran Lagan, Tom McClements, Fergal McDonnell and Thomas Cunningham the margin was reduced.

Continued excellent defending at Half Back by Ruairi Winters, Michael Treanor and Liam Flanagan who dropped into defence in the second half, with Aidy O’Neill dropping back from Half Forward when needed, ensured that the Éire Óg forwards were kept at bay out to the 65. Mark Corry who again put in a magnificent shift in midfield alongside Ciaran Lagan, ensured that the Omagh Forwards where able to get into scoring positions.

Forwards Tom McClements and Ciaran Lagan both struck the woodwork during an entrawling second half, and excellent saves from the Éire Óg keeper denied the Omagh lads the final push to steal the win from under the firm favorites noses. Omaghs pressing and improvement meant they outscored the Home team 0-11 to 0-07 in the second half.

Omagh will move on and play their next fixture in the Donegal League, MacCumhaills of Ballybofey this Friday evening in St. Patrick’s Park at 7.30pm.