By Kristina Tue 1st May 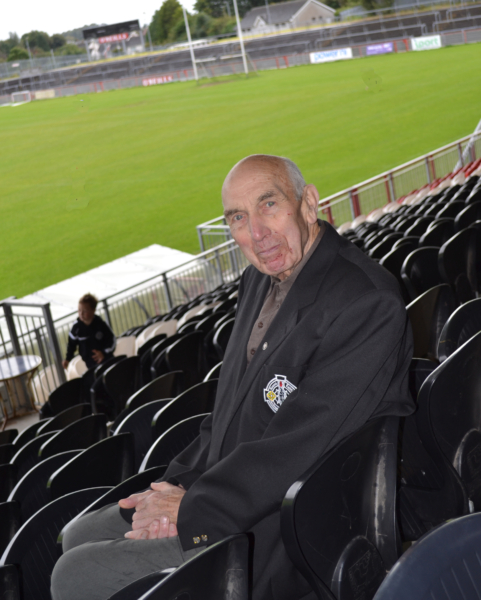 The late Leo Turbett, pictured in 2012 at his beloved Healy Park when he attended the 40th anniversary of the pitch opening.

The Executive Committee and members of St. Enda’s GAA wish to extend their deepest sympathy to the family and friends of one of our longest serving members, Leo Turbett, who has sadly passed away.

Leo, formerly of 6 Hacket Villas, was part of the legendary Turbett dynasty which has for several generations been an integral part of St. Enda’s and the wider Omagh community.

As a player, an administrator and club supporter, Leo has given a lifetime of service to our club and indeed Tyrone GAA.

A kind and modest character, he was one of life’s true gentlemen and was deeply loved by his family and friends far and wide.

Leo’s passion for Gaelic games was deep rooted and as part of a large family who were synonymous with the GAA in Omagh, he and his many brothers – including the legendary Thady – would leave an indelible mark on club activities over the decades.

Having played club football for many years, he was a member of the 1943 minor team which won the Tyrone championship after defeating Coalisland but the result of that game (which was played in July 1944) was unfortunately overturned on appeal.

Eventually he got his hands on what was to become his most prized possession – a Tyrone senior football championship medal – when St. Enda’s eventually landed the O’Neill Cup for the first time in 1948 after defeating Clogher. That was a proud day for Leo and his brothers Thady, Paddy and Frank who were also on the team which subsequently set down a marker for many future great club teams.

In later years Leo was a regular sight around the club where he helped with the development of Healy Park and was an active supporter of our weekly bingo activities. He was also a regular club umpire and he achieved another memorable milestone in 1972 when he pulled on the white coat at Croke Park as umpire when another club legend, Paddy Devlin, refereed that year’s All-Ireland final.

Despite failing health in recent years, Leo continued to take a great interest in club affairs and nothing gave him more delight than our senior championship victories in 2014 and 2017.

In October past, he got his hands on the O’Neill Cup once again when current senior captain Joe McMahon brought the prized trophy to Leo and Thady’s home to reignite great memories of past glories.

Leo’s passing has robbed St. Enda’s of another great legend and we extend our deepest condolences to his brothers Frank and Thady, nephews and nieces and wider family circle. He was predeceased by Jim, Paddy Gerry, Brian, Gene, Rosie, Teresa, Ila and Kathleen.

His remains will repose at his niece Helen’s residence at 17 Bracken Court, Tamlaght Road, Omagh. Funeral on Thursday at 12 noon in the Sacred Heart Church.

House private from 10pm on Wednesday and morning of funeral.

* Club members are requested to help form a guard of honour for Leo after the funeral on Thursday and their wear club colours.

The St. Enda’s Park Committee which was instrumental in the development of Healy Park at the official sod cutting in 1968. Leo and his famous peak cap can just about be spotted at the back. 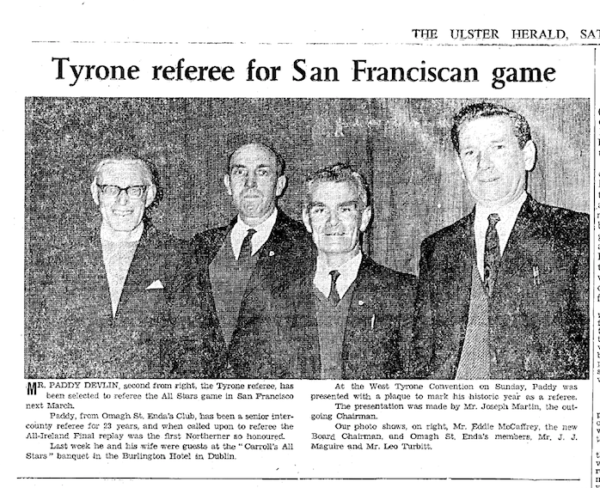 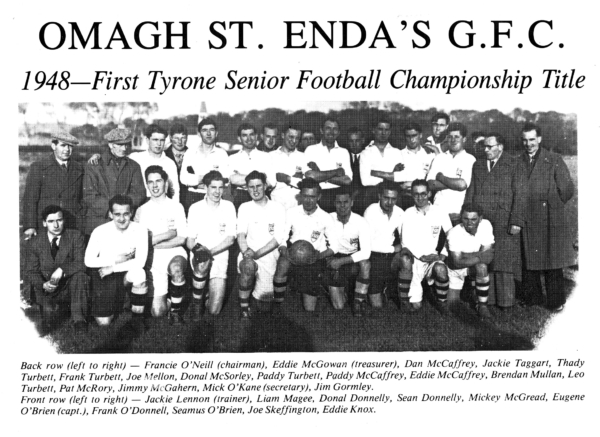 Leo (left) and his brother Thady are reunited with the O’Neill Cup in October 2017 – 69 years after they first won the trophy in 1948.