Slaughtneil 0-10 Omagh 0-08
Reigning champions Slaughtneil held on for a narrow 0-10 to 0-8 win over Tyrone title-holders Omagh in the Ulster Club SFC quarter-final at Celtic Park.
Three Christopher Bradley points helped Slaughtneil to a 0-6 to 0-5 interval lead, but Omagh had wind advantage in the second half, and clawed their way back with frees from Ronan O’Neill and Joe McMahon.
Slaughtneil lost talisman Chrissy McKaigue to a black card, but they used all their experience to hold on, with Shane McGuigan and Christopher Bradley hitting the target from frees.
Wind-assisted Slaughtneil had hit four wides by the time Christopher Bradley sliced over their opening score in the seventh minute, and they followed up with points from Padraig Cassidy and Shane McGuigan.Omagh were camped in their own half, but they soaked up the pressure, with Stephen Mullan and Joe McMahon getting them out of bother as the defending champions pressed menacingly.

The Tyrone champions met stiff resistance as they tried to play their way out of the danger zone, and they went further behind when Christopher Bradley skipped past two tackles to squeeze over a delightful score from a tight angle.

Omagh made the most of rare attacking opportunities, getting their opening score in the 15th minute through Conor O’Donnell, and following up with another from full-back Hugh Gallagher.

And they narrowed the gap to a single point when Conan Grugan slotted over a 23rd minute free.

Full-back Brendan Rogers tried to inject some momentum into the Emmets’ approach with surging runs from deep, but it was difficult to break down a heavily fortified Omagh rearguard.

And they went 15 minutes without a score, before Christopher Bradley fired over a free.

But a worrying tally of ten wides threatened to demand a price of the home side as Omagh went level through Conor Clarke, before Se McGuigan, spurning a goal chance, sent over the point that sent Mickey Moran’s side in with a 0-6 to 0-5 interval lead.

Shane McGuigan steadied Slaughtneil nerves by slotting over a couple of frees early in the second half, and as Padraig Cassidy ran strongly at the Omagh defence, Joe McMahon intervened with a vital interception. 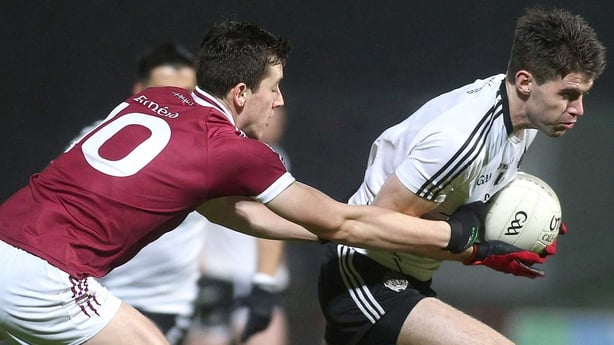 The Derry men suffered a huge blow in the 42nd minute when they lost Chrissy McKaigue to a black card, but they regrouped almost seamlessly, and conceded just two points in the remainder of the game.

It was verging on desperation at times, but the Oak Leafers held fast at the back, with Brendan Rogers and Meehaul McGrath producing heroics, while Padraig Cassidy took the fight to the Stt Enda’s with his strong running through the middle.

Ronan O’Neill narrowed the gap to a single point, but Christopher Bradley and Shane McGuigan held their nerve to steer over the crucial frees that carried the holders through to the last four.