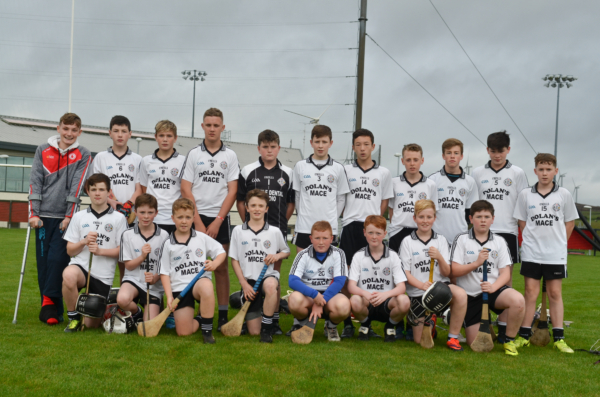 Despite losing against probably the best U14 hurling team in Ulster at the present time, Omagh U14 hurlers can take great heart from their overall performance against Dungannon in Saturday’s Championship final at Garvaghey.

Having already claimed the Tyrone Feile title, the Tyrone League title and an All-Ireland Feile title, Dungannon were raging hot favourites to make the clean sweep of titles. And while they might have finished up with a rather comfortable victory in the end, the main talking point of the game was Omagh’s spirited first half performance.

With goalkeeper Tiernan Cox in inspiring form, the Omagh defence repeatedly repelled Dungannon’s many attacks with some fine ball stopping and excellent clearances. By restricting Dungannon to just one goal in the first half from a penalty, the defending champions soon realised they were in a tough contest and at the break they led by just three points, 1-7 to 2-1. Omagh’s scores came from Enda Donnelly (1-0), Ryan Gormley (1-0) and Cian McGuigan (0-1).

The strength and experience of Dungannon eventually shone through as they picked off some early second half points, but it was only in the final quarter that they pulled away with some smart goals.

On this occasion, the final scoreline failed to do justice to the Omagh team who unfortunately had to field without some key players through injury.

This was the final game of the year but for ten the team they will continue for another few weeks with games in the North-West U13 league.

See more photos from the U14 final on our Photo Gallery