Home » U14 hurlers enjoy another fabulous trip to Féile in Wexford

U14 hurlers enjoy another fabulous trip to Féile in Wexford 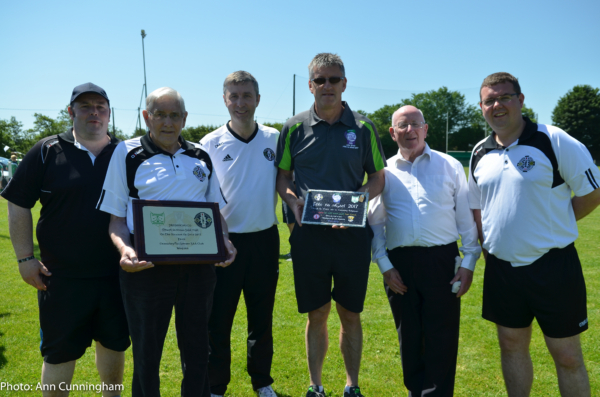 Later that afternoon both teams headed to Fenagh in Co. Carlow for the quarter-final stages where Omagh were paired with the illustrious Tullaroan club from Kilkenny, home of the famed Tommy Walsh. The energy sapping heat was beginning to take its toll and eventually the Kilkenny boys got the upper hand in the closing stages to run out deserving winners.

Our U14 hurlers returned from Wexford late on Sunday evening after a superb weekend of Féile na nGael activity.

The boys set off on Thursday evening for Glendalough where they had an overnight stop before continuing their journey to the sunny south east for three action packed days of hurling.

Hosted by the Crossabeg-Ballymurn Club, the boys competed in Division Six of the Féile and after a tough couple of opening games on Friday afternoon against local side Oylegate-Glenbrien and Bray Emmetts of Wicklow, the highlight of the weekend was our one point win over our hosts on Saturday morning.

Before the game started, the boys had a special visit from former Wexford All-Star hurler Rory McCarthy who provided them with some words of inspiration as they headed in to the heat of battle. With a large number of Omagh families in attendance, both teams were first paraded around the Crossabeg Ballymurn GAA Club pitch by a lone piper. From the beginning the action was fast and furious with both teams defending and attacking furiously. The game balanced on a knife edge throughout with both teams finding great difficulty in breaking through each defence but in the end it was the Omagh boys who demonstrated superb bravery and stamina to defend and attack repeatedly and hold the talented Crossabeg boys at bay to celebrate a memorable one point victory.

The historic victory over the Wexford side saw the boys qualify for the Shield quarter-final on Saturday afternoon but their morning’s exertions clearly took its toll. Playing against one of Kilkenny’s top clubs Tullaroan, the boys battled hard and were well in contention for most of the game until a couple of late goals killed off our hopes for progressing.

While the result might have ended our activity, it clearly did not dampen spirits as the boys enjoyed a memorable weekend.

On Sunday the team travelled to Ferns to witness the carnival atmosphere of semi-final and finals day before travelling north again, tired but clearly inspired by a wonderful weekend.

A special word of thanks to the many families who travelled down to support the boys in their exertions and especially our host club Crossabeg-Ballymurn for their hospitality. 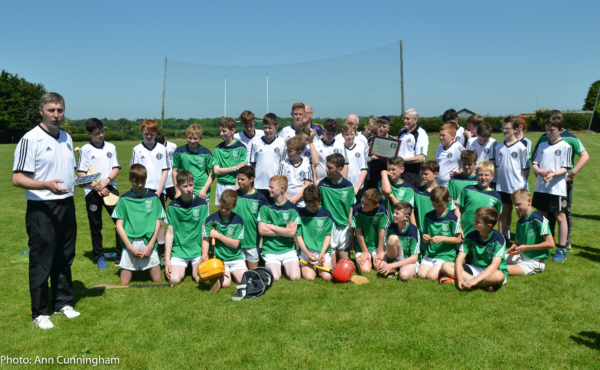 St. Enda’s U14 manager Dominic McClements addresses the Omagh and Crossabeg-Ballymurn players and supporters prior to presenting a special memento to the Wexford club to mark our visit for the Féile na nGael.

More photos from our Féile weekend in our Photo Gallery.