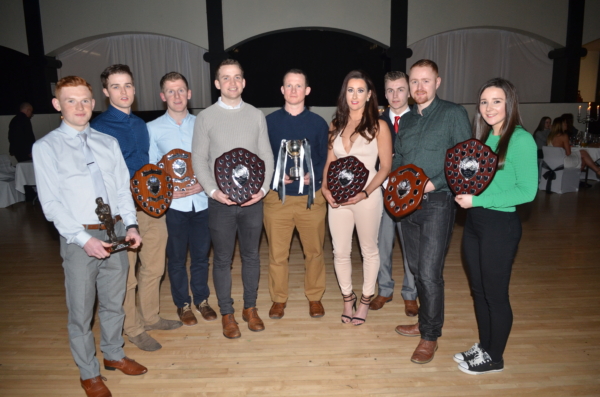 The ‘Hall for All’ at Healy Park looked resplendent on Saturday night when we hosted our annual awards night in the venue for the first time in many years. A large crowd thoroughly enjoyed the occasion which recognised various club members for their contribution in 2016.

As well as player awards for mens football, ladies football and hurling, the highight of the evening was the presentation of our Presidents Awards and Club Person of the Year.

Outgoing President for 2016 Andy McAleer had the honour of handing over the baton to another highly regarded member Kieran Young who will hold the reigns for 2017. As a former senior footballer and Tyrone and Ulster winning Scór Ceili dancer, Kieran was bar steward in the club for over 30 years and is still actively involved in club affairs including the management of our weeky bingo sessions.

The ultimate highlight of the evening was the presentation of the Michael Healy Memorial trophy to Club Person of the Year Kevin Cunningham, who was recognised for his huge contribution to the development of our games in 2016. As a youth football, hurling and camogie coach, Kevin who was a leading senior football and hurling player in the 90s, turned back the clock in 2016 when he played an instrumental role in restoring senior hurling to the club and went on to captain the team in their historic first appearance in the Tyrone Junior final.

Kevin, his wife Ann, and their family, epitomise what is great about St. Enda’s and the GAA in general, and represents the growing number of family units in the club who have given unstinting service to our activities throughout the year.