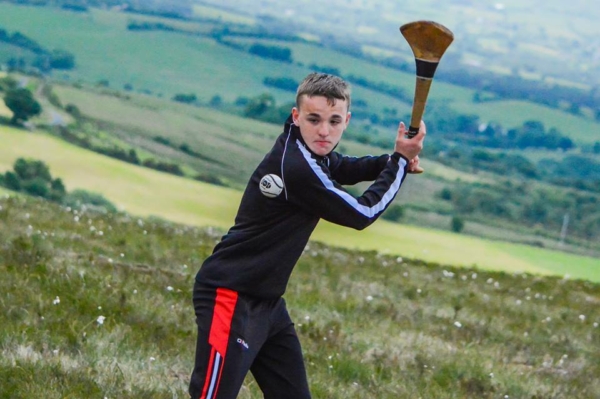 St Enda’s U16 dual player Jordan O’Reilly was crowned Tyrone U16 Poc Fada champion on the 16th June after taking the title at the inaugural Tyrone finals to be held on Pigeon Top mountain on the 15th June. Senior hurler Ryan Wood’s was pipped at the post as Carrickmore’s Conor Grogan edged the senior title.

Jordan subsequently progressed to the Ulster final to be again held over the lands of Gerry O’Kane at Pigeon Top. In very wet underfoot conditions he was narrowly pipped for an historic provincial title, losing to Antrim’s Dominic McEnhill who was declared the winner.

Dominic from the Rossa club in Belfast has strong St Enda’s roots. His Grandfather is Omagh man Dominic McEnhill who left the town some fifty years ago to live in Belfast. Dominic senior is a nephew of the late McCrossan Brothers Dominic and Mick who played with the Omagh club in the 30s and 40s and Dominic himself played with St Enda’s at underage level making an appearance too alongside some of the greats, The Donnellys, Jackie Taggart, Thady Turbett and Paddy Corey as a late replacement 15th man in a tournament. Dominic senior has strong local links still and wished all his many friends from the club best wishes.