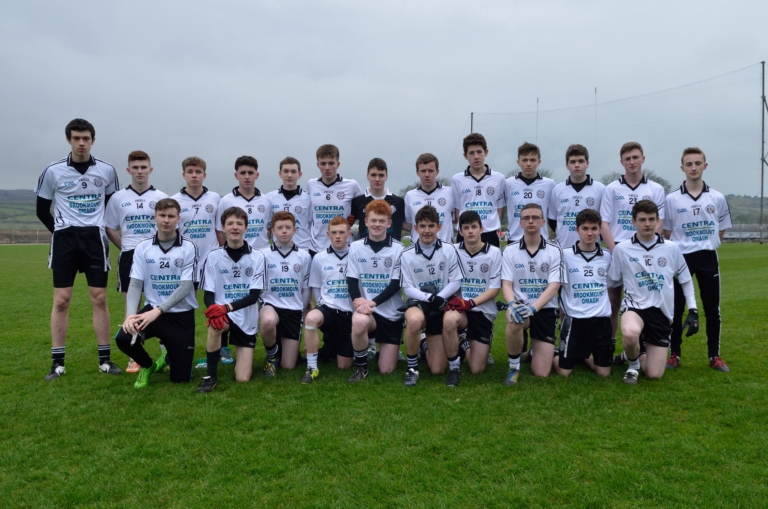 St. Enda’s minors who were defeated in the opening round of the championship by a single point

St. Enda’s minors staged a dramatic second half comeback in the opening round of the 2016 Grade 1 champonship in Dunmoyle on Wednesday evening before being agonisingly pipped at the post by a single point on the final scoreline of 3-14 to 3-13.

Errigal Ciaran totally dominated the opening half and despite being reduced to 14 players they held a commanding 2-9 to 0-5 lead at the break.

However, despite going further behind for a period at the start of the second half, the Omagh boys upped their performance considerably to haul themselves back into the game and came within a whisker of winning the game in dramatic fashion.

Two great goals from Ben Groogan and Damian McGuigan, added to a string of well taken points, piled the pressure on the home team as the game entered the closing stages.

With only a point seperating the teams, Errigal made a late break to score a third goal to seemingly put the match out of sight, but in an instant response an audacious goal from Aidan Clarke who lobbed the Errigal defence direct from a 21 yard free brought Omagh back into the game. Pumping with confidence, the St. Enda’s boys were looking very strong to score at least an equaliser, but time proved to be their enemy with the final whistle sounding much to the relief of the home side.

The defeat now ends the 2016 season for the minors but they can take some consolation from how they fought bravely to the end despite being seemingly dead and buried earlier in the match.

For some of the dual players on the team, the focus will now switch to hurling with the minors due to make an historic debut in the Derry Minor Hurling League as well as the domestic Tyrone league.