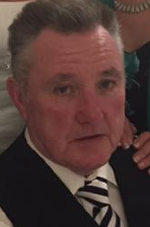 The Executive Committee and members of St. Enda’s GAA wish to extend their deepest sympathy to the family and friends of our club member Brendan Prevett who has passed away.

Brendan, who lived at Carnan Park Strathroy, was a keen supporter of St. Enda’s for many years and his untimely passing has come as a major shock to his family and friends.

In recent years Brendan was an active supporter and mentor of ladies football activities in the club and he was also a much appreciated worker in the club kitchen during big match days at Healy Park. His grandaughter Niamh is currently a key member of our youth Scór teams.

Brendan also had the distinction of being a member of the construction crew during the development of our clubrooms and main hall in 1983.

His remains will repose at his family home in Strathroy with funeral Mass in Christ the King Church, Strathroy, on St. Stephen’s Day (26th Dec), time to be confirmed.

The late Brendan Prevett (centre) with the kitchen team during the 2014 county final at Healy Park.