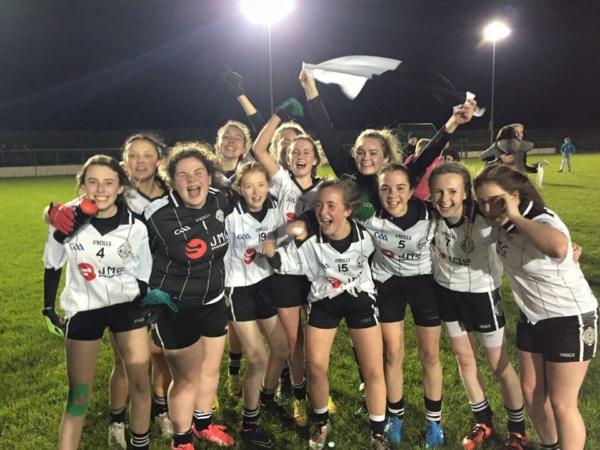 Omagh U16 Ladies overcame a strong Owen Roes side to secure the league title under the lights at a cold Aughabrack on Wednesday night.

Owen Roes settled quickly and with the aid of a strong breeze raced into a 3 point lead before the Omagh girls started to impose themselves on the game.

A couple of Sophie Kelly points helped bring Omagh back into the game before a speculative effort from Clare Murray dropped in over the keeper’s head for a goal to give Omagh the lead for the first time, a lead they were never to lose. The sides exchanged points to leave the half-time score Omagh 1-04 Owen Roes 0-4.

Omagh got a dream start to the second half when full forward Kelly first knocked over a great point and then, taking a great pass from the hard-working Brona McGoldrick, she waltzed past the full back and fired low to the Owen Roes net.

This seemed to spark Owen Roes into life but some valiant blocking and tackling from the Omagh defence held them at bay until a high ball into the Omagh square was palmed to the net by the tall Owen Roes centre half forward leaving the score 2-05 to 1-04 in the St Enda’s favour with 10 minutes to go. And what a pulsating last 10 it was.

The Omagh girls managed to briefly lift the siege with corner forward Brianna Gormley scoring a point from a tight angle but Owen Roes weren’t giving up without a battle and a goal and a point in quick succession left the minimum between the sides. Omagh again managed to break down the field and centre half back Chloe McGlinchey receiving a quick free from Chiara Murray scored a great point from all of 35 metres. Then came a defining period of play.

Omagh keeper Meabh O’Neill pulled off a fantastic point blank save and almost immediately Omagh broke down the field. Chloe McGlinchey picked up the ball around halfway and went on a mazy run before rounding the keeper to score a fantastic individual goal giving the Omagh girls a 6 point lead with minutes to go. A late goal gave Owen Roes a glimmer of hope but the Omagh defence again stood firm to the final whistle.

That’s title number four for our youth teams this year with the U16 boys annexing the League and Championship double while our U14 hurlers won the Feile Shield title.