The late Peter Tierney, pictured with his Club Person of the Year award in 2011.

IT IS with deep regret that we announce the untimely passing of one of our most esteemed club members Peter Tierney.

Aged 56, Peter was club treasurer for five years between 2008 and 2012 and was one of life’s true gentlemen.

A native of Roslea, Co. Fermanagh, Peter first came to Omagh in 1978 when he took up employment with the Ulster Bank.

An avid GAA follower, he immersed himself in St. Enda’s when his two sons, Shane and Conor, began to play football for the club. Within a short period of time, Peter became an integral part of club administration and was appointed Assistant Treasurer in 2007, before taking on full responsibility for the financial affairs of the club in 2008.

An honourable man, his quiet, friendly and unassuming personality endeared him to many people, making him one of our most popular and respected members. It came as little surprise to many that he was named as Club Person of the Year on two occasions in 2009 and 2011 in recognition of his outstanding contribution to the running of St. Enda’s.

Peter led by example when it came to supporting many club activities and he took particular enjoyment in being part of the Galway to Omagh cycle challenge in 2011 which supported club development and the Paliative Care Ward at Tyrone County Hospital.

His passing, after a relatively short illness, has come as a great blow to anyone who has had the privilege of knowing him and we extend our deepest sympathy to his wife Veronica, sons Shane and Conor, brothers Sean, Kevin and Gerard and sisters Mary, Kathleen and Bernadette.

Peter’s remains will repose at his home at 2 Bracken Close this evening Tuesday (after 7pm) and Wednesday with Requiem Mass in the Sacred Heart Church on Thursday at 10am. Interment afterwards in St. Mary’s Cemetery, Drumragh.

Club members are invited to form a guard of honour for Peter after the funeral mass. 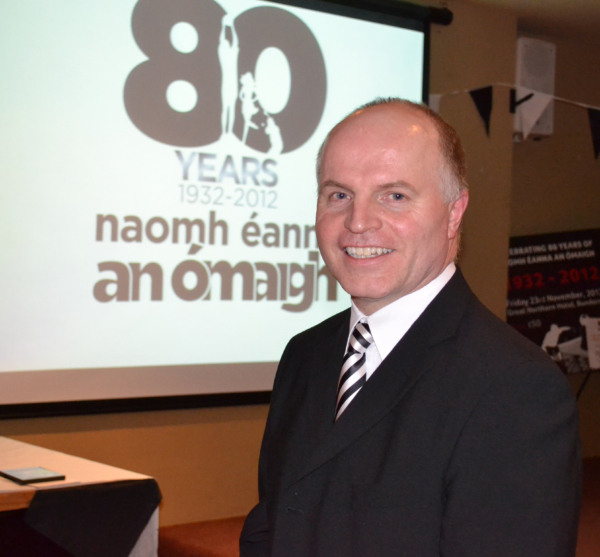 The late Peter Tierney, Club Treasurer 2008-2012. He will be greatly missed by many.