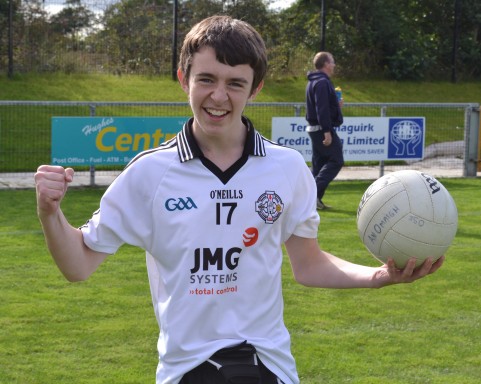 St. Enda’s U16s recorded a dramatic win in the championship today at Carrickmore when they came from behind to win with a last gasp point.

Substitute Ronan Clarke was the hero of the hour when he slotted home the winning point with virtually the last kick of the game shortly after coming off the bench.

The boys got off to a terrible start in the game and trailed 1-1 to 0-0 after just five minutes. Carrickmore added a second goal to lead 2-1 to 0-3 at half time and they went on to build on that after the break.

The St. Enda’s boys however refused to give in and a great goal from substitute Patrick Bradley midway through the half gave them a glimmer of hope. Carrickmore, however, responded with a third goal and as the game entered the final quarter they held a six points lead. Omagh continued to chip over some neat points mainly from Diarmuid O’Doherty, although Carrickmore looked likely winners as they held a four points lead with minutes to go.

Another point from Omagh left three points in it and as they searched for a goal, the St. Enda’s lads were unlucky to see a goal bound effort come off the post. But with less than a minute to go Tiernan Bradley struck with a fantastic goal to level the match. In a pulsating finale, the ball then broke to young Ronan Clarke on the left and he calmly slotted over a dramatic winner with seconds remaining.

Well done for staging a great fightback boys and for refusing to give in.