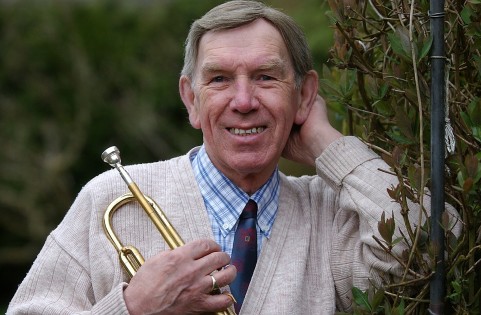 It is with deep regret that we report the sudden passing of Gene Turbett, one of St. Enda’s most well known stalwarts. He died on Monday evening at 10pm.

An integral figure around the club for many years, the popular Gene was a regular sight at our weekly bingo sessions as ‘caller’, and carried out the role diligently right up to last Thursday evening.

The former Melody Aces star’s distinctive voice was also well known not just within St. Enda’s but to many Tyrone fans as he held the role of PA announcer at big games in Healy Park.

A huge crowd, reflecting Gene’s popularity, attended the Requiem Mass on Wednesday morning in the Sacred Heart Church, followed by interment in Drumragh graveyard. In a fitting send off, Gene’s nephew Shay performed one Gene’s signature tunes from his days as a singer and trumpet player with the Melody Aces.

Club members, along with children from the Loreto Grammar and St. Conor’s Primary School, formed a guard of honour at the church.

The following article by Alan Rodgers will appear in this week’s Ulster Herald:

HE was one of the last links with a golden era for music in Omagh and the far-famed Melody Aces whose death this week after a short illness robbed the whole area of a ‘true gentleman.’

Gene Turbett, who lived at Ardmore Avenue in the town, was aged 80 and a member of a well-known Omagh family both in music and GAA circles.

Reared at St Bridget’s Terrace in the Gallows Hill area, he attended Culmore School before working in Todd and Pollocks Grocery store.

It was while in his early teens that he joined St Eugene’s Brass and Reed Band playing the cornet, an experience which led to his subsequent long association with the Melody Aces.

They created a new way of performing, clapping and dancing along with the music, they got involved and enjoyed it all too. Their fame spread as far as America where they toured on numerous occasions up until the early 1970s.

As well as his involvement in music, he was also a very keen follower of gaelic games and his native Omagh St Enda’s. He played for them and also the Tyrone Minors and Seniors and continued to follow their fortunes right up to his death. In more recent years he was the ‘voice of Healy Park’ making the public announcements at major club and county matches and up until just last week was the caller at the weekly St Enda’s Bingo.

Interviewed for the Ulster Herald in 2004, Gene remarked how he had few regrets about his life.

“I’d honestly say that if I had to live my life again, I would ask to do exactly as I did in this one,” he said.

His funeral Mass was held at the Sacred Heart Church in Omagh yesterday (Wednesday) when among the gifts brought to the altar were his trumpet and a football signifying two of his great interests in life.

Friends from the music industry, as well as members of the Omagh St Enda’s GAA club and pupils from both the Loreto, Omagh, where he had been caretaker for many years and St Conor’s PS formed a guard of honour.

At the graveside, his nephew, Shay, gave a moving rendition on the trumpet and in song of Mr Turbett’s signature tune with the Melody Aces ‘Bill Bailey..Will you please come home.”

Sympathy is extended to the entire Turbett family.